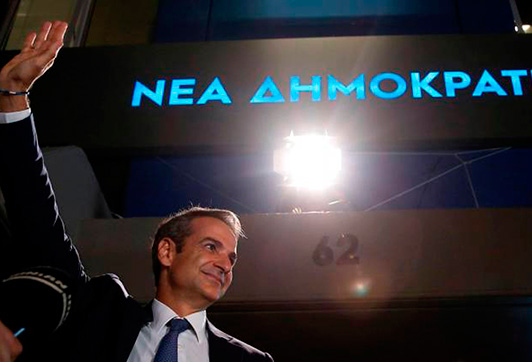 Against economic and social catastrophe, raise a revolutionary alternative that fights for socialism!

Four years ago, on July 5th, the Greek people mobilized massively to vote in a referendum against the new austerity plans imposed on a third bailout by the Troika dictatorship (European Commission, ECB and IMF). Despite the brutal international campaign of fear and blackmail, almost 62% of the electors voted OXI (NO) to the new adjustment plans. Days later, Tsipras and the Syriza government gave in completely to the Troika, agreeing on a third rescue in conditions even worse than those set in the plan submitted to the referendum.

This July 7th, after four years of austerity policies by the government of Syriza, new general elections were held, winning the traditional party of the right, New Democracy, the standard-bearers of the YES in that referendum. The conservative Kyriakos Mitsotakis, with 158 seats and 39.53% of the votes, will be able to govern with an absolute majority, thanks to the 50 extra seats obtained by the most voted party, according to the Greek electoral system. The European bourgeoisie has celebrated the triumph of the right in style, considering these results as an example of a return to stability and moderation. However, this superficial analysis does not correspond to reality.

New Democracy, a not so strong victory with a historical abstention

First, the victory of New Democracy, growing from 1.52 to 2.25 million votes, is far from the 3,000,000 votes it obtained before the outbreak of the economic crisis, collecting the bulk of those 750,000 new votes from other right-wing formations now disappeared (To Potami, Anel and EK, who obtained in the previous elections more than 600,000 votes together). We are really facing a regrouping of the vote of the right around ND.

On the other hand, the electoral participation has been the second lowest in history, only behind the elections of September 2015 after the referendum, staying at 57.92%, slightly more than half of the census, despite having lowered the voting age to 17 years old. Since the outbreak of the economic crisis, electoral participation has continued to decrease from percentages of around 75%, demonstrating the tremendous distrust felt by the Greek population towards parliamentary democracy and bourgeois institutions.

Another significant fact, despite the defeat of Syriza, is that, globally, the left (Syriza, Kinal, KKE and MeRA25) gets more votes than the right, 2,732,517 against 2,625,925. The KKE remains around 300,000 votes, being unable to attract new sectors of the youth and the working class disappointed with Syriza. On the other hand MeRA25, the new left-wing party of former Economy Minister Yanis Varufakis, who resigned after Tsipras accepted the adjustment plans of the third rescue after the referendum, breaks into the Parliament with 9 seats and almost 200,000 votes.

The fascist Golden Dawn party gets out of parliament, going from 379,581 votes to 165,709, falling below the 3% needed to enter, and losing its 18 seats. The bulk of its voters move into the ranks of its new far-right competitors, 'Greek Solution', which are entering the parliament for the first time with 208,805 votes and 10 seats. They are a new party created in relation to the Macedonian conflict, which shares parliamentary group with Vox in Europe and that has adopted the economic nationalism discourse of Trump or Le Pen.

The party of Tsipras has lost 464,890 votes from January 2015 elections, and 144,730 votes from September 2015 elections. It has obtained the second place with 31.53% of the votes and 86 seats. As we can see, they had already lost the majority of their votes after the betrayal to the referendum results and after accepting the draconian conditions of the third rescue.

Although Syriza has been able to prevent its collapse getting the 'useful vote' of the left against the right, this retreat has deep implications. The government of Tsipras has attack the Greek people by applying harsh adjustments (more than 88 measures demanded by the troika for the "rescue" of 86,000 million euros) and continuing the policies of its predecessors of ND and PASOK. This is the result of accepting the logic of capitalism. The leaders of the EU and the Troika have publicly praised him, pointing him out as an outstanding student who has fulfilled his duties: a new pension cut of 30% (for the 20th time), new privatizations continuing the dismantling and sale of the public sector (such as the Port of Piraeus to a Chinese company), increase of VAT and other direct taxes, a new law of evictions with online auctions of properties in order to quickly seize workers who can not pay their debts with banks, etc.

Among the three rescue plans, Greece has received more than 286,000 million euros, having its future permanently jeopardize. In the summer of 2018 the Troika established the end of his control over the Greek economy, but the nightmare is far from ending. Today, public debt reaches 180% of Greek GDP, unemployment exceeds 20% -40% among youth-, and 25% of GDP has been destroyed since the crisis began. According to data from the Bank of Greece, 427,000 people have left the country since 2008.

After the referendum, the speech of Syriza turned sharply more and more to the right. A drift that has involved in many cases a repressive and reactionary policy, as has happened with refugees, crammed into authentic concentration camps and living outdoors. At the request of the troika, it also hardened the conditions to call for local strikes, restricting this fundamental right of workers. This policy has implied keeping intact the economic and political power of the reactionary Orthodox Church and the military apparatus. While applying new cuts, the Government of Syriza, refused to cut back the huge military spending-the 3rd highest of all NATO countries-, guaranteeing the business of the Greek and European capitalists.

Lessons of an exemplary struggle

After more than 50 general strikes, hundreds of mass mobilizations in Syntagma square, movements such as "I don't pay" against electricity companies and energetic poverty, or after conducting hundreds of occupations of factories, institutes or hospitals against layoffs and cuts, the Greek working class gave an historical victory to Syriza with a very clear mandate: NO to austerity and NO to the Troika! A mandate reconfirmed by the subsequent result of the Referendum.

The European ruling class wanted to teach a lesson to the Greek and European workers, crushing a struggle that became an example and inspiration for millions throughout the continent. Still, the Greek working class rose to the occasion, giving the victory to Syriza and later to the OXI in the referendum.

Now, leaders like Pablo Iglesias try to rewrite history in order to justify the betrayal of Tsipras and his Government. They allege that there was no alternative, even pointing out, after the electoral defeat, that they had the courage to face the establishment powers. But no, it was not like that! It was the Greek working class who confronted them, defying the threats of the Troika and national and international capitalist. Tsipras and the leaders of Syriza gave in, knelt before them, and betrayed the aspirations and the will to fight and resist of the Greek people

A new Government of the rich for the rich

New president Kyriakos Mitsotakis is a member of one of the richest families in Greece. After studying at the most elite colleges and universities, he made his professional career in the finance sector at the McKinsey consulting firm in London, then at a subsidiary of AlphaBank, and later as managing director of NBG Venture Capital at the National Bank of Greece. His wife's name appears on the Panama papers, and he himself was accused of receiving 137,000 euros in the Siemens bribery scandal. The cabinet he put forward to govern, composed of previous right-wing ND ministers, ultra-liberal ministers and ex-members of far-right parties such as LAOS or EPEN, is a clear statement of intent.

Among its measures are big tax reductions, starting with corporate tax and employers’ social security contributions with the aim of attracting foreign investment, and continuing to reduce public expenditure, that means social spending, reducing further more the number of public employees. It has also made clear its opposition to collective bargaining agreements, its rejection to trade unions and its intention to further relax the already very precarious "labor market". It has put on the table the creation of private universities, now forbidden by the constitution, and to increase the participation of private companies in the university campus. The same recipes, therefore, that had led Greece to the current social and economic catastrophe, which will undoubtedly mean new social convulsions. A new period in which the working class and the youth, despite the difficulties, will once again open its way through the struggle in the streets against austerity, poverty, and all the scourges of the capitalist system. 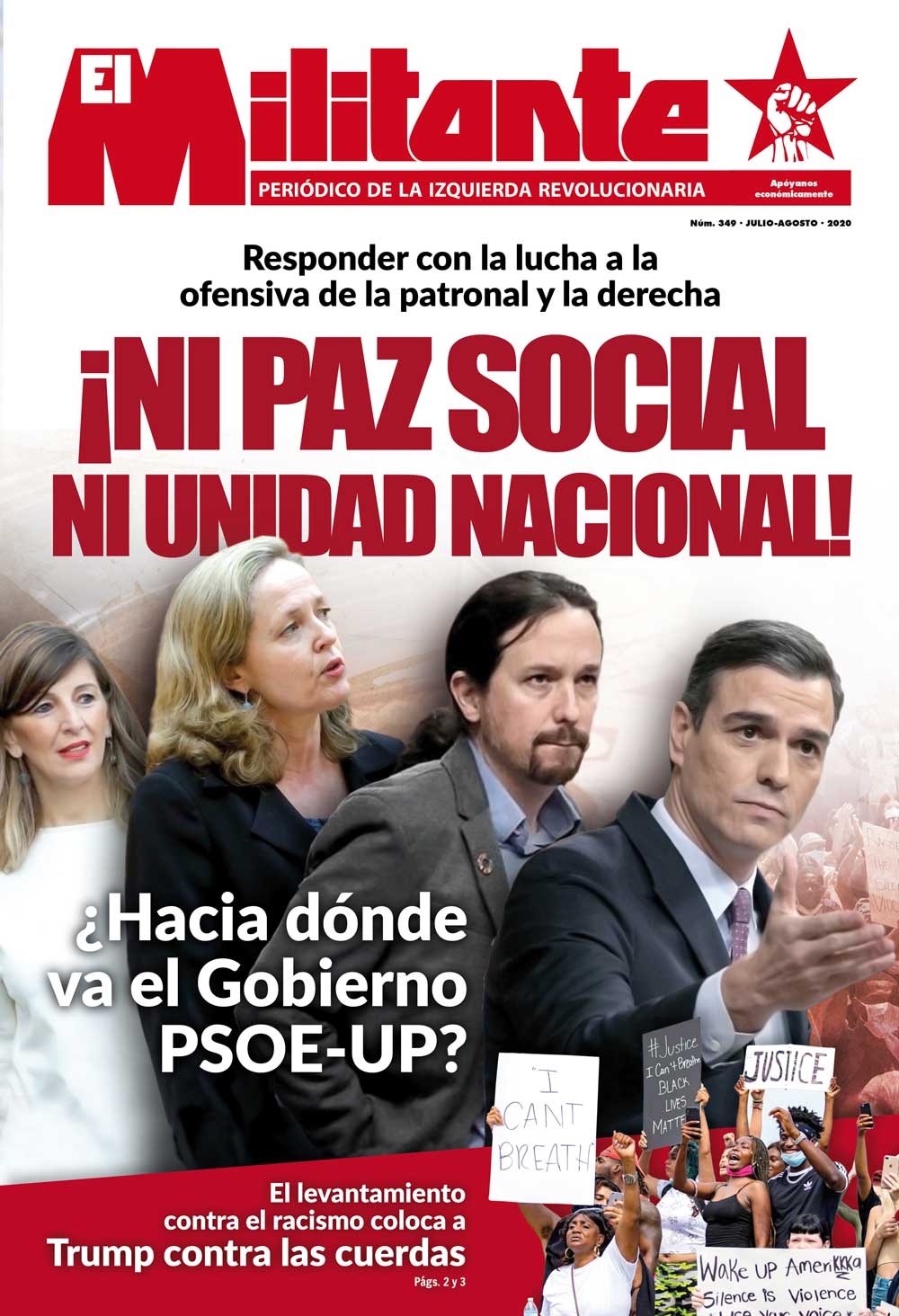