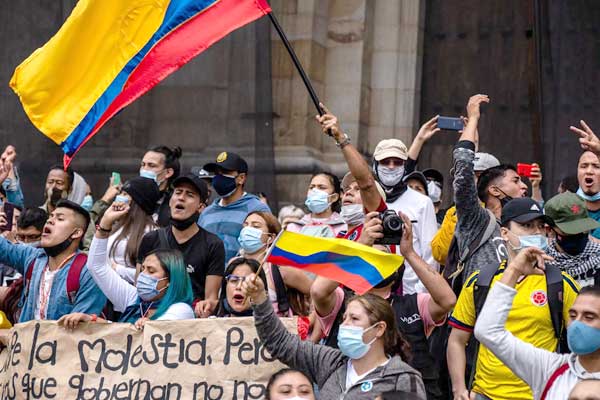 The uprising that the Colombian youth and the working class are leading since last April 28 against the extreme right-wing Duque has shocked the whole world.

The ruling oligarchy’s brutal repressive response, which has so far resulted in more than 55 young people and workers killed at the hands of police forces, thousands wounded and missing, and hundreds detained, has not stopped the popular mobilization. Uribism is going desperate, resorting to its entire deathly arsenal, including its fascist paramilitary gangs, as seen in the attack suffered by the Minga upon its entry into Cali.

The national strike has turned into a true revolutionary crisis. There has been no fluid circulation on any of the main roads for more than two weeks, the ports operate under minimal conditions, few schools are still operating, and labor has come to a complete halt in many industries. The daily mobilizations gather hundreds of thousands of people, who could well be millions in an ordinary health situation, while the population’s offensive against the capitalist oligarchy thrives incessantly.

This colossal leap of the class struggle in Colombia picks up the thread of the uprisings and insurrections that have shaken the Latin American continent since 2019, and takes the action of the masses to an extraordinary level.

The global impact of the protests is undeniable. The images showing violence and police abuse have shaken millions of people on all continents, and the movement arouses enormous sympathy among the youth. Colombian immigrant communities, especially large in the US and Western Europe, have called for numerous mobilizations supporting the National Strike and against repression with massive participation.

In addition to revealing popular solidarity and outrage, these protests have also been a clear complaint against capitalist governments’ hypocrisy. Although the concern that repression could unleash a revolution has led to some reprimands from several imperialist institutions, the world bourgeoisie’s support towards Duque is unanimous and firm. This murderer guarantees, at any price, the juicy business they maintain in the country. If only a fraction of what is happening in Colombia happened in Cuba, Venezuela or Bolivia, it would open all the news programs, fill the columns of the newspapers and television gatherings, and voices would be raised from all sides crying out for a foreign military intervention or a coup to overthrow the government.

In Spain, by means of telegraphic messages on Twitter, PSOE and Unidas Podemos have expressed their rejection towards violence in an abstract way, without directly addressing Duque or his government. The case of Ione Belarra, Minister of Social Rights and Podemos future general secretary, is representative.

Belarra expressed Spain’s firm commitment to “the construction of peaceful, just societies, respectful towards human rights, throughout the world”, appealing to the role of the UN and the EU. The same EU that does not lift a finger to prevent this massacre or that which the Palestinian people are suffering? What just and peaceful societies is Belarra talking about?

This rotten diplomacy, typical of social democracy, is an open capitulation to the imperialist powers. The complicity of the European governments with the repeated state violence in Colombia is politically supported, and the demand for the immediate fall of the murderer Duque and the punishment for his crimes is renounced. A position that does not benefit, but rather damages the struggle on the other side of the Atlantic and that, unfortunately, portrays the drift of UP leaders.

Faced with the savage repression of the Colombian state apparatus, the movement has begun to organize self-defense to guarantee the integrity of those who participate in the protests and the maintenance of the indefinite National Strike. For example, organizations such as the First Lines (young people who resist charges and repel them in a coordinated and orderly way) and different Neighborhood Committees have emerged. Due to the very development of the process, these organizations have become popular assemblies where struggle plans are discussed and local life is organized. 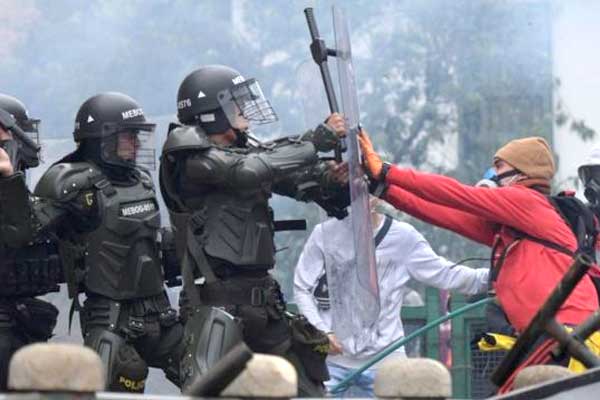 Faced with the repression of the state apparatus, the movement has begun to organize self-defense to guarantee the integrity of those who participate in the protests and the maintenance of the indefinite National Strike

This dynamic has gone furthest in the working-class areas of Cali, the third largest city in the country, especially in the neighborhoods of Puerto Rellena and Loma de la Cruz, renamed Puerto Resistencia and Loma Dignidad, respectively. There, the First Lines guarantee coexistence, distribute the fuel that is expropriated from the gas stations and organize the distribution of food that arrives through peasant solidarity from the outskirts of Cali.

In order to reinforce the strike and the protests, thousands of indigenous people joined the call for minga (“meeting”) of the Cauca Regional Indigenous Council (CRIC). In practice, the occupation of Cali by the CRIC, coinciding with the elements of popular control and management in different neighborhoods, could have resulted in a new leap in the revolutionary crisis.

Aware of this fact, the local bourgeoisie could not allow this situation. The mayor of Cali, Jorge Iván Ospina, from the Green Party, in unity of action with Uribism, called on “good citizens” to defend the city, while Duque reinforced police and military presence. In coordination with the city's drug trafficking mafia and the police, armed paramilitary pickets were organized to prevent the Minga from entering Cali, opening fire on the indigenous guard and leaving nine people severely injured.

This episode is a reflection of the radicalization of the country's bourgeoisie and petty bourgeoisie, especially those linked to smuggling, drug trafficking and large estates, whose position is threatened by the rise of the mass struggle, and are willing to crush, no matter how, the National Strike. The counterrevolution is the other side of the advance of the revolution.

The role of the reformist leadership

In the heat of this formidable mass movement that has put the government and the capitalist state in check, the leader of Humane Colombia and candidate for the presidency, Gustavo Petro, has aroused enormous sympathy, increasing his authority before the movement due to the support he has shown towards the struggle.

Faced with the legislative and presidential elections, there is a great possibility that he would get massive support, and the fact that he could manage a historic victory cannot by any means be ruled out. And this is the strategy they propose to the movement. In a leaked audio, Petro himself was heard saying that the National Strike should have been called off and declared triumphant once the tax reform was overthrown, the mobilization's first timely victory, in order to return to “democratic stability.” Petro wants a quiet electoral campaign, to take over the presidency and manage capitalism in a “decent” way.

Also, the National Struggle Committee, which possesses an important credibility in the movement, has been undermined before the revolutionary vanguard due to its refusal to demand Duque’s immediate resignation, as well as its reluctance to offering a serious and ascending plan of struggle. The CNP plan, led by the Central Union of Workers (CUT), the main labor union, is based on trying to reach minimal agreements with Duque by presenting itself as a reliable and sensible intermediary. In this way, the bureaucratic and also material interests of the CNP state leadership are not compromised, while it maintains its authority. However, Uribe's refusal to dialogue with the CNP leaves the bureaucracy with no way out amid a situation of suffocating pressure.

In the midst of capitalism’s brutal crisis, the Colombian bourgeoisie is unable to make any substantive concessions, so it needs to resort to repression and overexploitation to fortify its regime. Humane Colombia’s and the CNP’s approach, that is, to raise opposition within the framework of constitutional legality and the logic of an oligarchic system that resorts to brutal repression to sustain itself, collides with the limits of reality. If this path is followed, the consequence would be the exhaustion of the movement, its fragmentation, and the survival of a murderous government sustained by state violence.

Socialism is the only way out

On May 12, centralized mobilizations were called in the cities, as a rejection of the fascist violence suffered by the Minga in Cali. After 14 days of indefinite strike, this demonstration was once again a complete success, showing the Colombian masses’ resistance, vitality and strength. However, the maintenance of the strike, instinctively and spontaneously, cannot be sustained without the support of the vast majority of the population, among which skepticism may begin to spread if there is no progress in the struggle, and if a compelling and achievable program is not presented. 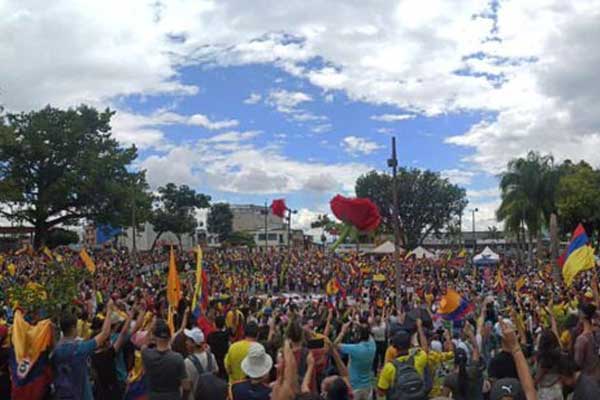 On May 12, centralized mobilizations were called in the cities, as a rejection of the fascist violence suffered by the Minga in Cali. After 14 days of indefinite unemployment, this day was again a complete success

In this sense, the example of organization in Cali leads the way. It is no coincidence that neither the paramilitaries nor the police can enter Puerto Resistencia or Loma Dignidad. Through direct action, these neighborhoods have, for now intuitively, managed to handle food and health resources, as well as self-defense, through applied workers' democracy. The creation of the Cali Resistance Union (URC), which brings together representatives from 21 neighborhoods of the city, is a great step forward.

The task of the revolutionary vanguard in Colombia is to follow this path, and to promote the organization of Strike Committees in all neighborhoods, schools, work centers, lanes and localities to organize the resistance and apply the demands of the population. It is also necessary to strengthen these organizations and coordinate them at state level, through eligible and revocable delegates to unify the struggle throughout the territory. This would be a formidable impulse for the victory of the movement, winning over the most doubtful sectors.

The tremendous strength that the Colombian masses have demonstrated has to be used by the revolutionary vanguard to build a socialist program that can solve the needs of the working class and the poor peasantry: the nationalization without compensation of the banks and the strategic sectors under workers’ control, the distribution of the land to end with landlordism, the defense of the environment and natural resources against the multinationals’ plundering, the popular trial and the punishment of the police, military and paramilitary bodies for the savage repression against the people and the 6,402 recognized false positives.

The indefinite strike maintained for weeks, despite the repression and limitations of the reformist leadership, is proof of the development and advancement in the consciousness of millions in Colombia. The distance that the struggle as a whole has gone, and particularly in Cali, shows the totally favorable correlation of forces. Around the departure of Duque and his murderous government, a socialist program that connects with the aspirations and needs of the working class, the youth, the poor peasantry and the indigenous people, has to be articulated. Fighting by force of the facts to apply this program and defend life, as well as the conquests already achieved, is the only way out of capitalist misery. It is the time for socialism in Colombia and in Latin America. 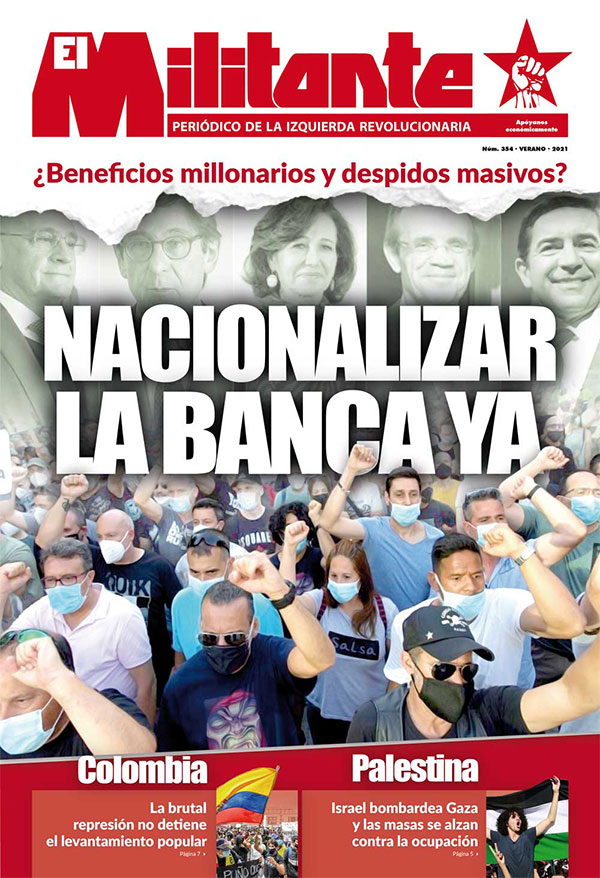